I was shooting a time-lapse sequence of a developing storm yesterday when these young boys started playing around on the swimming enclosure, amusing themselves as young boys do. Normally I hate it when random people enter the frame, but in time-lapse they often add another dimension as they scurry around like ants on red cordial!
I thought that there may be a couple of frames that would make a decent still photo in their own right. This is the one that I decided to process. 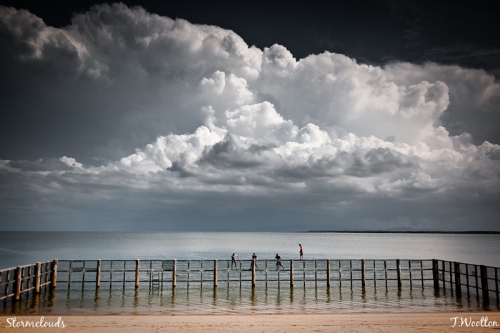 It wouldn’t win any prizes but as I was looking at it, it struck me as being symbolic of life at times. When we are young we are carefree and everything is fun. Inevitably, there will be the occasional stormy patch that comes up over the horizon. Some we will be able to sail on through, some we will need to shelter from until they pass. Often there are rainbows and clear skies on the other side!

Hopefully the storms that these boys will encounter will have rainbows!

This entry was posted on September 30, 2010 by islandimages. It was filed under Images, photography and was tagged with beaches, photos, skies, storms, Whitsundays.