Dinant (pronounced Dee-non) is a picturesque town on the River Meuse in the French speaking area of Southern Belgium. Dominated by the Church of Notre-Dame with it’s distinctive spire and the imposing Citadel sitting atop the cliffs, it is a charming place to stroll around and get a great meal at one of the many cafes and restaurants.

Settled since around the 7th century it has had a turbulent history and has had many episodes of devastation over the centuries with the German Forces wreaking havoc during the First World War being the latest episode.  The Citadel has been used by occupying forces over the centuries and has a great museum outlining the history of the town. 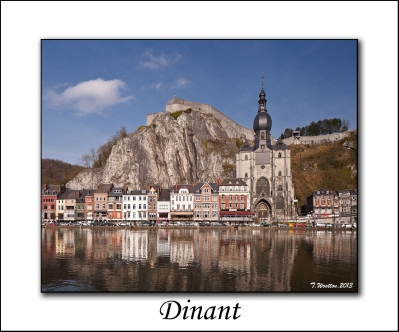 Dinant is also the birthplace of Adolphe Sax who invented that great musical instrument, the saxophone. Up until a few years ago, about the only commemoration of this fact was a statue and plaque in the middle of town, but nowadays the bridge across the river is adorned with colourful saxophones decorated by artists from many European countries which are a welcome addition to this beautiful area. 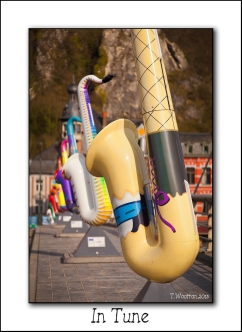 This entry was posted on July 5, 2013 by islandimages. It was filed under Belgium, photography, travel and was tagged with Belgium, Dinant, photography, saxophone, travel.