Before heading to Ypres for Anzac Day, I had been doing some research  to find out more about the Ypres Salient and Australia’s involvement. I discovered that about 20 km south of Ypres, amongst all the other Commonwealth War Cemeteries lay one of the only two Australian only cemeteries on the whole Western Front. Ploegsteert or ‘Plug Street’ as it was known to the Allied soldiers  was  the sight of some intensive combat and also one of the first places where the Germans deployed the deadly Mustard Gas.

The fact that an all Tasmanian company – with men from the same district as my family came from – had been mentioned by an official historian sealed my decision to visit the site.

Traveling through the Flemish country side, it was hard to reconcile the peaceful farm lands of today with what surely must have been the closest thing to hell on earth back then. Only the stark white headstones of the numerous Commonwealth War Cemeteries scattered over the landscape gave any indication of the bitter struggle that had happened here. it was also sobering to reflect on the fact that the remains of thousands of young men on both sides lay beneath these fields, but had disappeared, perhaps forever.

It was a suitably gloomy day as we found our way down country lanes and a final short walk through the woods to find this peaceful last resting place of some Australian Diggers, ironically in a cemetery called Toronto Avenue.

In this quiet little corner of the woods lay the immaculately kept ( as all Commonwealth War Graves are)  resting places of  78 Australian soldiers (mostly from NSW). Wreaths had been laid at the central Memorial and each headstone had a small plywood cross inscribed with a message from schoolchildren back in Australia. Even in this far-flung corner of the world they were remembered by their countrymen.

At the end of one of the rows of headstones was a poignant  reminder of family bonds. Private J.S Luff had left behind a young family in 1917, in 2013 his Grandchildren had paid him a visit to leave old photos of that family and to let him know that he had not been forgotten. 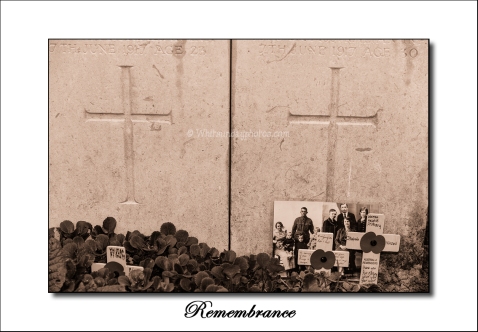 April 25th is a very special day in Australia. ANZAC Day is a day that commemorates all the Military personnel who did not make it home from the various theatres of war that Australia & New Zealand have sent troops to since the Boer War at the beginning of the 20th century.

ANZAC actually stands for the Australian & New Zealand Army Corps that was formed in Egypt in 1915 and sent to fight in the ill fated Gallipoli  campaign in Turkey in WW1. It was there that the ANZAC legend was  born and the Australian Diggers are remembered with a traditional Dawn Service and street parades throughout Australia.

Australian troops were involved in the horrors of the Western Front in Europe, where for four long years the opposing sides waged bloody & futile trench warfare with neither side able to score a decisive victory while whole towns were sometimes wiped off the map in the heavy shelling. ANZAC Day is also commemorated in small towns in Northern France where there are many Australians buried.

This time last year, I was in Belgium and had a loose plan of being in France for Anzac Day. When I mentioned this to some Belgian friends, a town called Ypres in Flanders was mentioned as having ANZAC Day ceremonies and that the Last Post was played every evening. I vaguely remembered reading about Ypres and WW1 so I thought “Why not”?

The Ypres Salient was a part of the Western Front that  is not as well known about in Australia as Gallipoli or the battlefields of Northern France, yet there are many Commonwealth War Cemetaries, large & small, scattered throughout the peaceful farming lands of Western Flanders in which Australians are buried

The Menin Gate in Ypres is a huge Memorial to the 55,000 Allied soldiers who fought & died in  this part of the Western Front and have no known grave. Each of their names are inscribed on the walls of this Memorial.

Of that number, approximately 6000 are Australian, 7000 Canadian, but the majority are by far from Great Britain. It is indeed a humbling experience to walk around this Memorial and when you think about the numbers of men who lost their lives during this futile ,bloody conflict, the thought inevitably comes that those who glorify war have really missed the point & perhaps the politicians who send young people to war should be sent into the battle themselves!

Winston Churchill , when he first saw the  utterly ruined town of Ypres, said that the town should be purchased and left in it’s ruined state as a reminder to future generations never to let a conflict like this happen again. The citizens of Ypres had a different view and so the Menin Gate was built to honour those who had disappeared into the Flanders mud. Sadly, the world did not learn from this madness!

After the town was rebuilt, the citizens of Ypres have honoured the Allied soldiers who were stationed in the area, every evening (apart from during WW2) by playing the Last Post. ANZAC Day  draws large crowds to remember the fallen from the ‘War to end all Wars’! 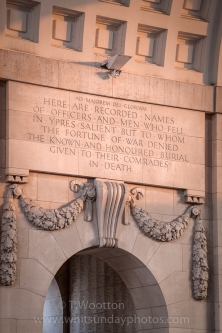 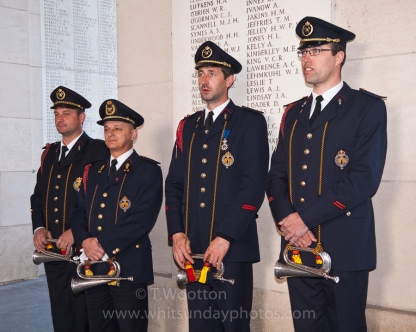 Dinant (pronounced Dee-non) is a picturesque town on the River Meuse in the French speaking area of Southern Belgium. Dominated by the Church of Notre-Dame with it’s distinctive spire and the imposing Citadel sitting atop the cliffs, it is a charming place to stroll around and get a great meal at one of the many cafes and restaurants.

Settled since around the 7th century it has had a turbulent history and has had many episodes of devastation over the centuries with the German Forces wreaking havoc during the First World War being the latest episode.  The Citadel has been used by occupying forces over the centuries and has a great museum outlining the history of the town.

Dinant is also the birthplace of Adolphe Sax who invented that great musical instrument, the saxophone. Up until a few years ago, about the only commemoration of this fact was a statue and plaque in the middle of town, but nowadays the bridge across the river is adorned with colourful saxophones decorated by artists from many European countries which are a welcome addition to this beautiful area. 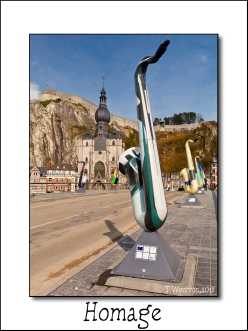 While I was in Belgium I was staying near the picturesque city of Mechelen. Situated about halfway between Antwerp & Brussels, it can trace it’s history back to Roman times and like many European cities has had it’s share of of prosperity & decline at different times. For a brief period it was even the Capital of the Low Countries during the 16th century. Unfortunately, one of the city’s low points came during WW II when the Nazis used it as a Transit Camp for  Jews being sent to the infamous death camps

Today it is a cosmopolitan provincial city with parks,canals and a bustling town centre  which is dominated by the imposing St Rombout’s Cathedral which began construction in the 12th century.

Believe me, that carillon is huge and it is just as impressive on the inside! Every day just before they strike the hour, the bells play a tune which sounds a little like “Three Blind Mice”, quite pleasant to listen to as you stroll around town!

The Grote Markt is surrounded by cafes and at the other end is the Stadhuis which although not quite as grand as Antwerp, still draws the eye quite well.

Antwerpen is the Dutch name for Antwerp and literally means ‘hand throwing’. Legend has it that a race of giants cut off the hands of travellers who refused to pay a toll to cross the River Schelde on which Antwerp is situated. A heroic figure by the name of Brabo managed to kill the leader of the giants,cut his hands off and threw them into the river thus ending their monopoly and giving the the name to a city. This heroic feat is immortalised  in the Brabo statue situated in the Grote Markt of Antwerp. That is one of the best stories for a place name that I have ever heard!

Antwerp has a long history dating from around the 6th century and today is one of the great trading ports of the world. Beautiful place to wander around and it doesn’t feel like a big city at all! Like a lot of European cities, history and culture are reflected in the  grand buildings that surround you of which Cathedrals are some of the most impressive.

The Grote Markt in Antwerp is surrounded by beautiful architecture and you could wander the surrounding streets for hours with a camera and never run out of subject matter.

The Stadhuis (Town Hall) in the image above is covered in the flags of many nations EXCEPT Australia! I did notice that there was a missing flagpole so I reckon that an Aussie tourist has souvenir-ed it for a drunken bet, as you do!
City skylines are always changing and Antwerp is no exception, not too far away a redevelopment of one of the old dock areas is underway and the centrepiece is the M.A.S. Museum which is strikingly different from anything around it. 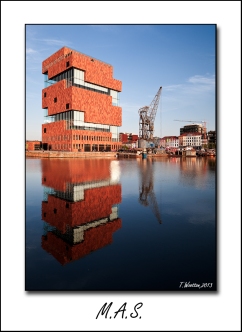 I was hoping that it would be floodlit at night but unfortunately that was not the case.