A Lesson in Lighting!

Apologies for being absent lately, I just haven’t been doing anything particularly noteworthy over the last month. However, just recently I had the pleasure of spending some time with a Fender steel guitar and some handmade timber guitar stands which are made by a friend of mine.

These items are both works of art  but photographing them was an exercise in controlling & shaping light to show them both at their best!

I had the guitar for a couple of days before the stands arrived so I had a little play with a couple of speedlites, coloured gels and a white wall to see what I could come up with.

This was one of the early images I got before I decided to get a little more adventurous with a red gelled speedlight bounced off a wall.

I quickly learnt that polished steel will show up any imperfections pretty quickly so I spent a lot of time wiping off fingerprints! The other thing I learnt was that  even though you need a broad area of light (ie bounced flash) it was sometimes the smallest angle change that made all the difference to the reflection on the guitar.

When the stands arrived I had an idea that a spotlight type of lighting similar to a stage might work ok  so a snooted Speedlite held above the stand  gave me the light to show the stand to advantage without light going all over the place!

The guitar need another speedlite fired through a diffusion panel on the floor to camera right. Both flashes were were in manual mode & fired by wireless triggers.

Once again it was a game of small adjustments and the best way to attack this  is to adjust one flash at a time  and build it up from there. The end result was what I was aiming for and my friend was more than happy!

The Mantis Guitar Stands are more a piece of furniture than something you would use at a gig. Each  one is hand-crafted from re-cycled boatbuilding timbers such as Huon Pine, Mackay Cedar,Teak  & Beech to name a few. Steam bent and laminated with epoxy glues, each stand is an individual. 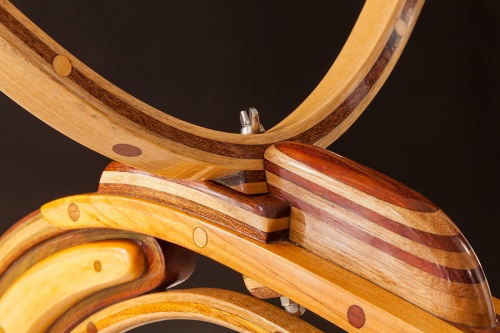 They really are a beautiful piece of work  and I hope the images do them justice! If anybody would like some more info, send an email to wokkasmith @bigpond.com

I’m off to Tasmania for a couple of weeks, see you when I get back!