Lucinda is the mainland town closest to Orpheus Is. Only a small place, it has 3 of the largest sheds I think I have ever seen which are used for sugar storage. The sugar is then conveyed along arguably Australia’s longest jetty (6km) to ships offshore. Due to damage incurred during Cyclone Yasi the jetty and sheds are lying empty at the moment.

This image is of another jetty which used to take reasonably large vessels but due to shoaling is now only used as a fishing platform. 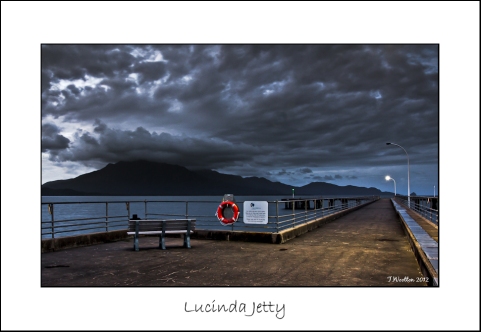 In the background you can see Hinchinbrook Island which has some huge peaks that are nearly always covered in cloud, in fact there are still missing aircraft from WW II  that haven’t been found to this day! I was hoping to get some images of the island and the sugar jetty next morning but once again, the rain beat me!

I found this neat little scene on my way back fro Mossman to Cairns. Took off up a side road and drove for miles to find a spot where the sugarcane wasn’t obliterating the mountains in the background!
This is a scene that is so typical of FNQ and the fact that the Great Dividing Range is so close to the coast makes it a great area for photographers. 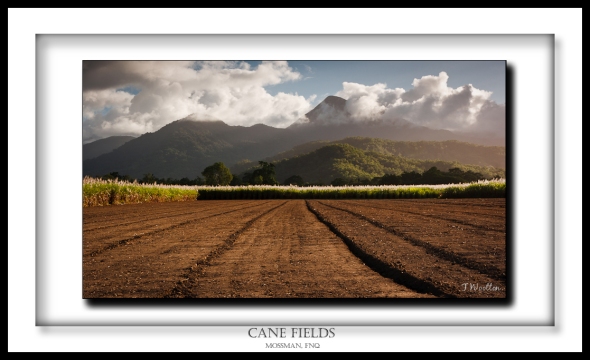 On another note, this will probably be my last post for a while. I am just about to head to Gladstone for 5 weeks as the Master of a 40m barge with a huge backhoe on it, basically a non-propelled dredge which is part of the push to build new infrastructure for the Port of Gladstone in Central Qld. It will probably be fairly dull but the pay is well worth it, which means a long overdue camera upgrade is definately on the cards! 🙂

Another view of the Port Douglas sugar shed but with an old time look to it. I had another set of images with a paddlesteamer in it which looked great until I realised that one of the images was a little shaky for some reason. Had to ditch the lot 😦