The hours suck, but the view out the window is great!

Another one from the vault. This is an image from what used to be my “öffice”. One of my favourite anchorages in the Whitsundays, Stonehaven is tucked up on the NW side of Hook Is. Secure holding,surrounded by lofty hills, close to some of the best snorkelling and diving in the Whitsundays and you get to see some great sunsets like this one!

Hopefully I will be back out there soon!

Who believes in the Tooth Fairy?

Christian Fletcher has just posted on his blog about his outrage about the proposed gas plant at James Price Point near Broome and got quite a few responses.
The article on Four Corners was quite illuminating on the lengths that some politicians, mining companies and even members of the aboriginal community will go to to get these projects running, citing the benefit to the community
While there will undoubtedly be economic benefits flow on to the wider community from these projects, if you believe that these projects are started on that principal, then you believe in the tooth fairy!
These projects come about because a bunch of people see an economic benefit for them and their shareholders, in other words, they have access to a resource which can only be used once and they will sell that resource for as much as they can.
The fact that it will employ a lot of people and contractors is probably a necessary evil that is part of the cost of doing business.
After the resource is finished or is no longer economical, what is left is a huge hole in the ground and a landscape that is dramatically altered from it’s original state.
The images below are of two islands, Cockatoo and Koolan, which are situated in Yampi Sd. on the Kimberley Coast. 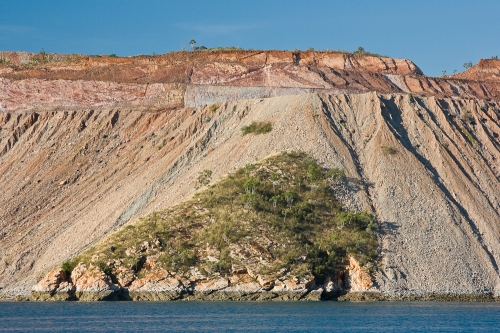 Not very pretty are they?
These two islands have been mined sporadically for iron-ore for many years and have both been shut down when prices made it unviable to work. In Koolan Is. case they bulldozed much of the equipment into a pit and flooded it.
My question is what will happen to what’s left of these islands at the end of the mine’s life? Theoretically they are supposed to be rehabilitated, but how do you rehabilitate that?
This image is what it would have looked like originally. 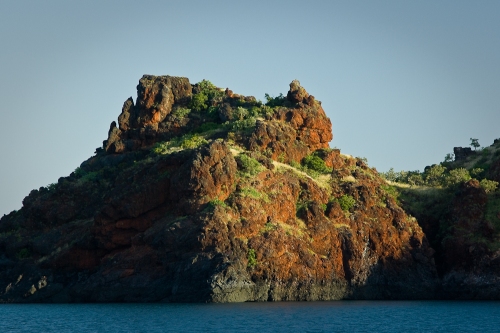 These are relatively small mines compared to mines in the Pilbara but if you extrapolate this to include all the infrastructure like towns, camps, railways & port facilities such as Port Headland, Karratha etc, what will happen to all this when the iron/oil/gas runs out?
What will happen to the Plant proposed at James Price Point in the future, will the multinational company that owns it take it ALL away???
Is it worth the price??

A couple of reasons to get up early!

These two images also show Gloucester Is. but from the eastern side and early in the morning. 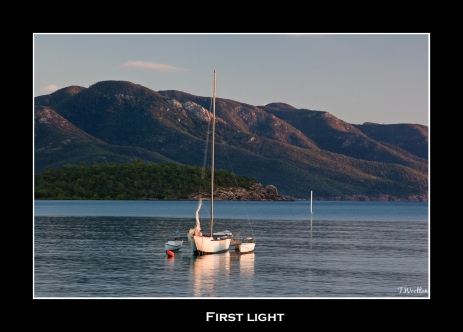 105mm, ISO 100, 1/4s@f8.
The above image was taken from a neat little place called Dingo Beach which is one of a bunch of little bays and beaches situated between Airlie Beach and Bowen.

35mm, ISO100, 1/15s@f8.
Hydeaway Bay is the next bay around and both places have some seriously nice homes being built. Not a bad spot to live or holiday hey?

Another couple of images from the same day as my last post. 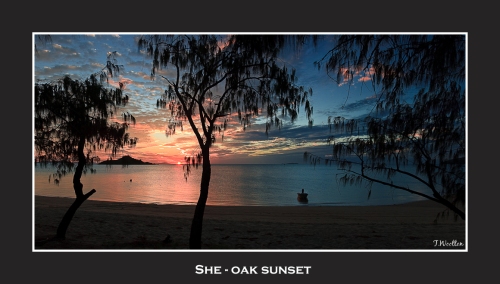 In response to a query from Graham at Ecomuse Images and with inspiration from truenorthmark, I am going to step back in time to 1989 when I was lucky enough to spend 5 months in Fiji.
I turned up with my surfboard, my backpack and some Nikon camera gear and no idea of where,what ,how. (Get the picture?)
To cut a long story short I kind of went native after being adopted by a local family who had family scattered over the Fiji Islands.
Even though I didn’t get to surf some of the places I was trying to get to, I got to spend time with some of the most generous and warm-hearted people I have yet to meet. I also saw and learned some aspects of Fiji that most tourists never see and got a few images to boot.

These images have been scanned from 35mm Kodachrome Slides so image quality may not be perfect but for 20 yo images they are not bad! 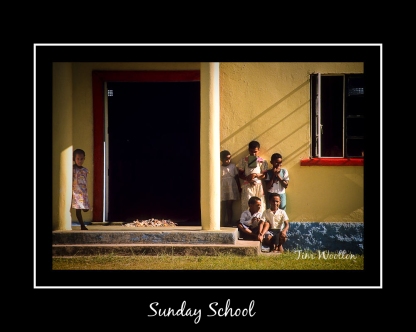 Hope you enjoy the next few posts from the vaults!

As I mentioned in my last post, this landscape looks like it could all falll down with a good sneeze! This is in an image taken at Steep Island that shows how it is all being slowwly whittled away. Some of the rocks that have fallen off the cliff are big! I saw even bigger falls in places, would not want to be underneath them……….
On another note, I have just checked out some images posted by Christian Fletcher and Mark Stothard. Nice! That is the beauty of photography, we all see things differently! 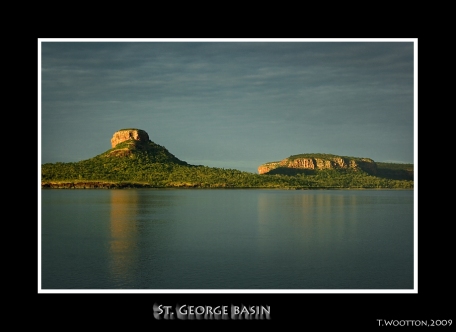 This is a shot of St. Patrick Is. taken just after sunrise. St,George Basin is a large basin that the Prince Regent R. flows into.
The tidal flows in the entrance to this basin have to be seen to be believed, places like Whirpool Reach can have currents of up to 10 knots and will throw large vessels around like toys. In the middle of the mayhem, dolphins are calmly fishing!
This particular morning we were anchored off a place called Python Cliffs, I had a feeling that there could be a photo op which worked out very nicely!

On one of the few times I managed to get ashore at a spectacular place by the name of Raft Point. There are Wandjina Art sites up in the cliffs which the tourists got to see, however I had only a short time ashore so made the best of the situation.
The place is named after the story that the aborigines would build rafts here to go out to Montgomery Reef about 10 miles offshore. Huge tidal flows here so I wonder how many got swept away! 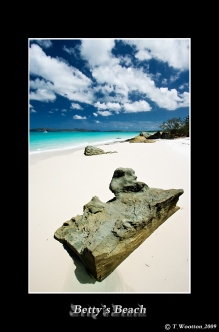 This was shot on one of those rare occasions that I managed to get ashore and all the elements came together!

I had seen this rock and wanted to get a good shot of it but once again  I needed to be there at the right time. As I needed to be clambering around some sharp volcanic rock , I remembered some foot wear. Getting to the beach I was surprised to see no-one and even better no footprints! Believe me this is one popular little spot!  Wind, tide, sun and humanity had all lined up for the short time I had available.

Another shitty day at the office! :-) 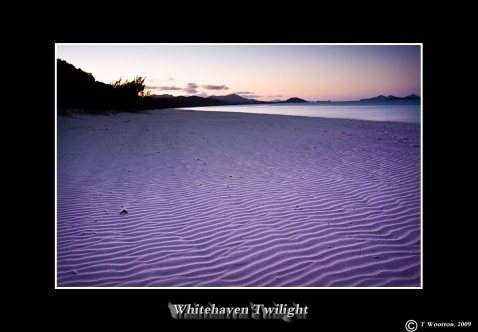 As I have mentioned in  my About page I am a professional skipper of  charter boats, mostly based in the Whitsundays, but occasionally I get to work in some other cool places such as the Kimberley in Western Australia. In fact I will be heading over that way for a month at the end of March.

Photographically, the advantages are  that I get to see some pretty cool stuff that not many people get to see apart from the passengers and crew on board with me at the time.  I am often out there at dawn and dusk when you can get some of the best light which you would think would be great, right?

Frustratingly, because I am responsible for the vessel’s safety and passenger comfort,  I  often need to move the boat to a safer or more comfortable anchorage and therefore away from a great photo opportunity!  Bugger!

There are a myriad of other things that  sometime require my attention on board at times when I would much rather be ashore with the camera taking advantage of some good light.  Weather and tidal conditions can also play a big part in whether you can get the opportunity to shoot.

The upside is that occasionally I do get to step foot ashore by myself (and a million sandflies!) and get a shot that doesn’t look like all the postcards and tourism brochures!

As much as I dislike shooting during the middle of the day when the light is harsh  sometimes I need to just make the most of the short time I have , this is where a polariser comes into its own  to enhance some of the great colour.

Ideally, it would be great to have my own boat and be free to take advantage of conditions  as I have a thousand great images in my head but you need to be there at the right time. One day…….!

In the meantime , I will find as many opps. to shoot as possible and maybe come up with some great images. that should keep me occupied for a few years. I hate going to the office! (Yeah right.)

Welcome to my office!

Following on from the last post, I thought I would post an image that gives you an idea of  why people come to see the area .

For a start the islands are National Parks with the exception of  3. Sitting smack bang in the middle of the 2nd largest Marine Park in the world,for the most part it is a natural wonderland. Of course there are resorts scattered around but out of 70+ islands only 7 have any form of habitation on them.

Being so close to the mainland makes the whole area very sheltered so marine tourism is pretty big here. You can do daytrips on yachts or high speed motor vessls. If you prefer to spend a bit more time here you can do a 3 day trip on  something like “Solway Lass”. Lots of options!

‘Solway Lass” is over 100 yrs old and has quite a history which you will learn about if you ever decide to go for a trip on her.

After spending close to 15 years working here, people have asked me ” do you ever get bored?” I just look around  and  say ” Welcome to my office!”

There is one of those sayings that is a good credo to follow if you love nature. “Leave only footprints, take only photographs.”

This image was taken on Langford Sandspit late one afternoon. Because it is a popular place for charter yachts to spend a bit of time, it is usually covered in footprints and sometimes people!

At high tide most of the spit is underwater when it is then known as One Foot Island.

I am still learning how to drive this blogmobile so if any posts don’t look too good just smile and go to something more interesting!
As I write this we have a Cat.3-4 Cyclone by the name of Hamish heading our way. By the look of things it will be the largest and closest system we have had in the Whitsundays for many years. Airlie Beach could do with a bit of a cleanup anyway but hopefully no major damage will occur! In the meantime it is a case of prepare the best we can,go to the pub and get a bottle of rum and sit it out!
If there are no further posts here you will probably be contributing to disaster relief! (again) 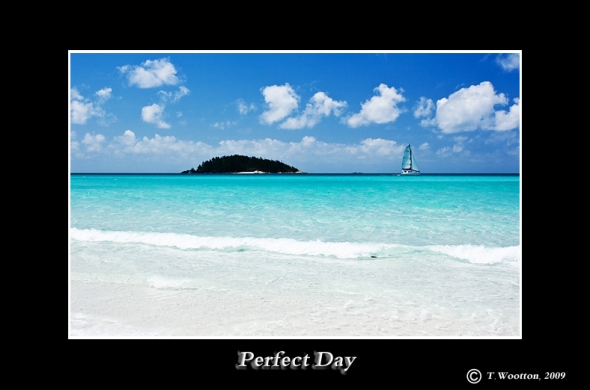 Hi, My name is Tim and I am a photographer living in Australia,more specifically, a pretty nice part of the world called the Whitsundays.

Once I get the hang of all this blog stuff I will be posting some images of the area that I have shot and some random musings as well.

For those of you out there who are interested in the Whitsundays or you have nothing better to do, drop in occasionally,feel free to comment and hopefully you like what you see!