It’s been a filthy couple of days outside due to a Tropical Low/cyclone which has been wandering around the Coral Sea for the last week, trying to decide whether it will cross the coast or not!

Recently I upgraded from Lightroom 3 to LR 5, so, while the weather has been wet & wild, I have been going back over some of my files to see what difference it makes. Without going into too much boring detail, the upgrade was well worth it with some new tools such as the Radial Filter  and a revamp of exsisting tools such as the Spot Removal giving you more options  for tweaking your images.

One tool I have been impressed with is the Highlight Slider which is brilliant for retaining detail in  skies which I was always struggling with especially when conditions were light o/cast skies. It is nearly like finding an extra two stops of dynamic range in your camera!

The Clarity slider has had a makeover as well and they seem to have put it on turbo so it needs to be used carefully unless you want mid-tone contrast to make your images look like they have a sandpaper texture applied.

I have previously posted about this Skye Boatyard, while having a look at some files I played with these two different viewpoints of the same scene. 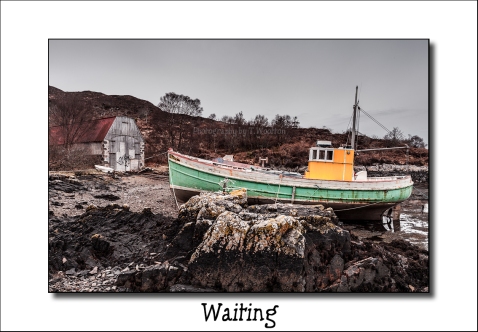 For me, they really bring back the bleak & forlorn weather & scenery of that day!

I hope you all had a Happy & Safe Festive Season and made lots of great images!

For most Europeans, large cathedrals are probably a bit ho-hum, but for most Aussies, they are not something we see on a regular basis.

So when we travel to Europe we go a little culture crazy, visiting cathedrals,castles and other large old buildings whenever we can! I am no exception and having a camera gives me even more reason.

I had a couple of hours to kill in Edinburgh before catching a flight back to Brussels. Couldn’t leave my luggage at the station so decided to wander around for a little while. Within 10 minutes I came across this magnificent cathedral and managed to get a few images with the 24mm Tilt-Shift lens. The young lady obligingly decided to catch some sun in the arch and gave the image a sense of scale!

These are images of an area in NE Skye called the Quiraing which is an area of huge landslips. In fact the area pictured is still slipping to this day! It’s a surreal, almost Tolkiensque landscape that I had to myself for an hour or so and the howling gale just added to the wild, untamed feel of the place. On more friendly days it is very popular with walkers for obvious reasons.

Being careful not to get too close to cliff edges in case I got blown off, I managed to get a couple of shots that were fleetingly lit by the sun peeking through the racing clouds which was just above me. An exhilarating photo session indeed! 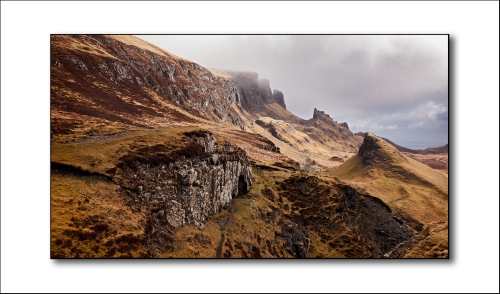 One thing I loved about driving around Scotland was the farmhouses, they just seem to suit the landscape perfectly no matter what the weather! White is the universal colour, chosen because it’s cheap and easy to re-apply.    I would drive through a landscape devoid of trees and buildings and around the next corner there would sit a white house as a counterpoint to all the dun coloured grasses covering the slopes.

These are a couple of images I managed to get on a blustery morning in the north of Skye,blowing a gale and frequent showers!

It’s a pretty dramatic landscape, but the buildings help define it and give it more context, don’t you think?

I am a great one for heading down side roads just to see what’s there. In Scotland, once you are on the track you are commited to the end as they are so narrow!

Sometimes you find something interesting, often it’s a bust. This road ended at a rather non-descript jetty & boat ramp but as I looked around I spotted a rather different boatyard than in my last post.

Loved the Scottish colours (blue & white) as well as the rock enclosures but what really intrigued me was the stone anchors which I guess was to stop these heavy boats being blown away by the strong winds which these islands are subject to!

My first night on Skye was spent at Kyleakin which is near the end of the Skye Bridge. I decided to go for a walk out to the ruins of Castle Moil and came across this boatyard which had seen better days. The lowering leaden sky and the cries of the gulls seemed to suit the melancholy look of this place so I spent the next half hour here. Never did make it out to the ruins!

Castle Moil is in the background, legend has it that it was built in the 15th century for a Norwegian princess called ‘Saucy Mary’ who would hang a chain across the narrow strait and charge a toll on boats trying to use the strait!

The drive between Fort Williams & the Isle of Skye through the Western Highlands would have to be one of the most spectacular that I have done so far!  Overviews of the Nevis Range are the first that you just have to stop for before heading down to Glen Shiel.

After heading along the shores of Loch Cluanie, the Cluanie Inn is a welcome stop for a bite and coffee. Their Bar stock over 200 varieties of Malt Whiskey, which I am rather partial to but the views of the surrounding ranges was what got my attention!

I was struggling to find a decent foreground for this image and had to settle for a clump of rocks poking out of the grassland but this is typical highland country, as you can see there are not many trees.

Heading on down Glen Shiel, I spied this old bridge which is part of the old military road built around the 1750’s. Not far from here is the site of one of the last battles of the Jacobite Uprising where British forces defeated a combined force of Spaniards & Jacobites in 1719. Rob Roy Macgregor was involved in the battle and managed to evade the British. 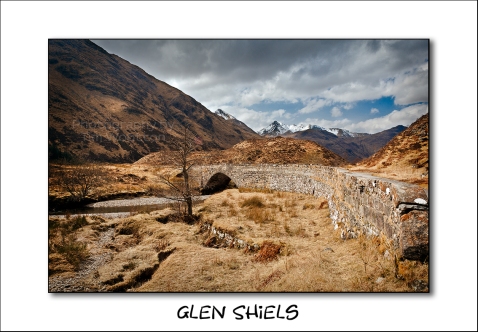 Seriously, this whole area is a postcard around every corner!

Just having a play with a B&W version.

What do you think, does it work?

Of course,no visit to the UK or Scotland is complete without castles of which there are quite a few. One of the most famous in Scotland is Eilean Donan near the Isle of Skye but that was festooned in scaffolding.

Castle Kilchurn sits on the shores of Loch Awe, dates from around 1450 and was the ancestral home of the Campbells of Glen Orchy. Originally, it sat on a small island which is now connected to the mainland after water levels were adjusted in the Loch.

After many alterations and a sometimes turbulent history it was abandoned in1760 after being badly damaged by lightning.

Once again, weather was not my friend! it had been blowing a gale with light rain most of the day. I walked down to the Loch edge during a break in the rain and as I set up, the sun broke through. A light sun shower forced me to cover the camera so at one stage I had the castle with great light on one side, a brilliant rainbow on the other and I was getting rained on!

Of course, when the rain stopped, the great light disappeared as well! Scottish photogs must have the patience of saints!

Scotland has some dramatic scenery, especially in the Western Highlands where I spent 10 days driving around. Some of the most spectacular is in the Glen Coe region between Oban & Fort Williams.

Unfortunately i was dogged by wild weather during a large portion of this period, with strong wind and persistent light rain that made for difficult shooting much of the time. The locals were fond of telling me that I should have been there a week ago. “Aye, we’ve been suffering a drought!” was a common comment!

I returned to this spot a few times in the hope that the weather would let up just enough to make the most of this location. Cloud I could deal with, but rain was the killer!

This was a shot I was forced to make by climbing down and shooting from under a bridge to escape the light rain that was frustrating me. Not the shot I wanted,but It came out well none the less! 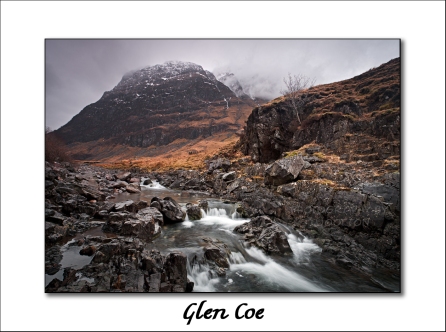 Just out of sight behind a small ridge is a solitary whitewashed farmhouse which really gives the towering mountain a sense of scale. That shot will just have to wait I guess!