Having a little look through my archives today and found this image from a sailing trip to Port Douglas a couple of years ago. We were anchored at Fitzroy Is near Cairns ,when a large rainsquall came in off the sea and settled over Cape Grafton for a little while. I pulled out the camera in the hope of getting some interesting light which didn’t eventuate (as usual!)

I took a couple of images when the cloud texture looked interesting and they have been sitting on my hard drive ever since. Decided to have  a little play in Lightroom & Photoshop to see if I could make this one look halfway decent and this is what came out the other end. Considering how flat and uninteresting it looked when I started, I am quite happy with the result!

Today is Australia Day! One thing that Australia is known for is our beaches. We just happen to be blessed with miles & miles of some of the best beaches in the world, many of which,see very little human activity apart from fishermen, surfers and the odd beachcomber.

The East coast of Tasmania has some stunningly beautiful beaches that for the most part are deserted. This is one I found near Swansea and I spent a good two hours here without seeing another person, heaven!

This rocky outcrop was an obvious subject, combined with the colours of sea & sky, a couple of nice images was the result. I think you’ll agree!

This is an image from Coles Bay which is the gateway to Freycinet National Park. It is a very different place from my last visit around 25yrs ago! Back then, it was a sleepy little place with minimal accomodation options and the nearest Nat. Parks office was an hour up the road at Bicheno. Now it is  a tourist mecca during the summer months and there are people all over the place!

After seeing some beautiful images of The Hazards reflecting the evening sunlight  I was hoping to get some nice images but the weather beat me again as frontal cloud moved in from the west and killed any chance if good light. As they say, if the eggs are broken, you may as well make an omelette, so I got some nice images taking advantage of the pretty cool cloud layer that moved in!

There will be a couple more from this area coming soon!

During my recent visit to Tasmania I took the opportunity to have a look around the West Coast. One of the wildest coastlines in the world,often lashed by the fury of the Roaring Forties and the Southern Ocean it is a wilderness that is populated by small settlements of hardy fishermen and miners.

Conditions conspired against me with one day of incessant rain and the next day of rather flat lighting but hopefully these couple of images give you an idea of what is is like! 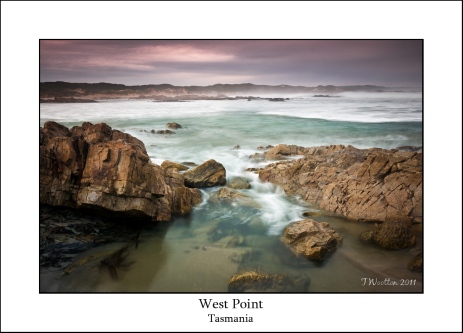 The second image was taken just before I slipped on a piece of kelp, went a over t and my brand new Canon 60D with a 10-22mm hit the rocks! Managed to pick it up just before a wave claimed it, camera survived with a cracked LCD but the lens was bent out of shape as well as the remote shutter release. Lucky I didn’t have the 24-105 L series attached!

I reckon you could have heard some very loud four letter words over on the East Coast!