“Whitsunday Magic” pictured here is a bit of a jinx ship! She was bought out from Turkey and for a few years was one of the largest vessels in the Whitsunday charter fleet, (I was briefly one of her skippers) before mysteriously sinking at the wharf. After refloating she was sold to someone who had plans to turn it into a floating restaurant down on the Sunshine Coast. After basic repairs they set off, only to have engine trouble shortly after and decided to return to Airlie Beach where the boat sat on anchor for quite a while until earlier this year when  the remnants of TC Oswald created havoc along the Queensland Coast.

“Whitsunday Magic” was driven ashore along with many others and has stayed there since with the tide flowing in & out of her hull. I took advantage of the lowest tides of the year to walk out to her across the sand/mud flats & see if I could get some interesting images. 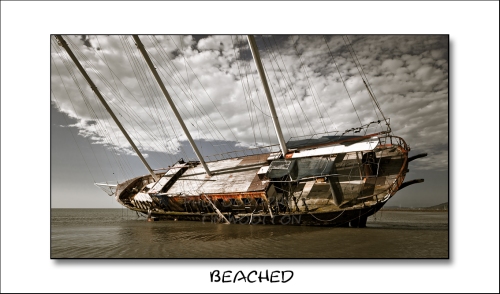 After this shot I waded out a bit for a different angle & that’s where it all went pear-shaped! While trying to extricate my sandal from the mud that I was slowly sinking into, I lost my balance, ended up on my knees and my 5D Mk II with 24mm TS-E came perilously close to going for a swim. Unfortunately they did get a bit of a light shower so the 5D is on it’s way  to hospital as I type this!

I guess it would have looked pretty funny to anyone who might have been watching, but at the time………………….

I guess you have all heard by now that Tropical Cyclone Yasi smashed into the Qld Coast at Mission Beach last night. Rated at Cat.5 it is the largest storm to impact Qld in a century.
The coast between Townsville and Cairns copped the brunt of the storm with places such as Tully,Cardwell, Mission Beach and Innisfail sustaining major damage. Luckily no reports of major injury or death have been received so far.
The Qld Government should be commended for the planning and procedures they have implemented during this event and our Premier, Anna Bligh has been an absolute trooper during all the disasters that have hit Qld in recent times!
Here in the Whitsundays we had gale-force winds all night but once again no significant damage has occured. Early modelling suggested that TC Yasi would come ashore not to far away from the Whitsundays so everybody was prepared for much worse conditions than we actually got.
Driving around Airlie Beach this morning I was flat out finding anything dramatic to photograph apart from the “surf” in the bay. 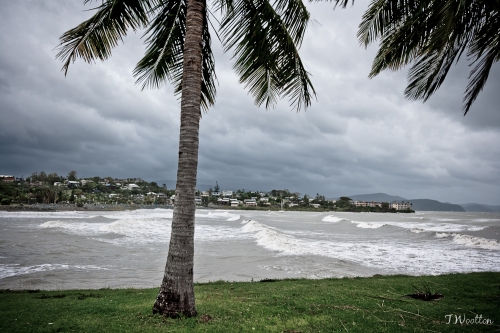 A marked contrast to what it is normally like! A few desperate surfers even paddled out in to the mushburgers risking stingers and sharing the line-up with a yacht that had dragged anchor overnight. 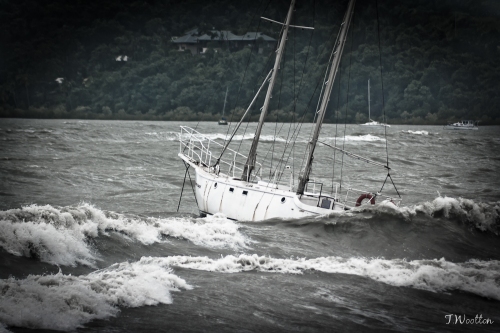 Every now and then it would get nailed by a wave that would break outside it and I am amazed the anchor was holding it at all!
The vessel featured in my last two posts was getting a hammering so I thought a couple of shipwreck shots were in order just to have on file. 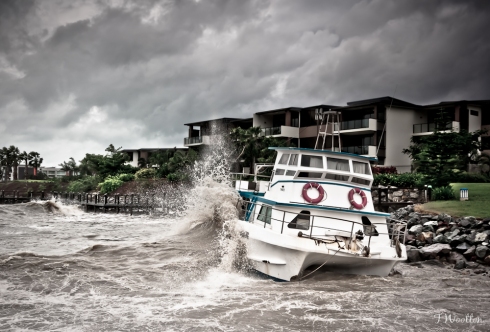 While we here have escaped this time many people further north have not been so lucky and will take a long time to recover.

I went back down to Shute Hbr today to try and get some images that give an idea of the desolate look of vessel that has found itself on the beach due to forces that are sometimes far greater than the seamen who spend a lot of their time doing everything in their power to keep their boats afloat! 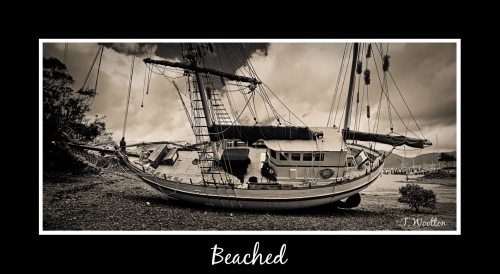 Luckily these vessels have suffered little real damage compared to many others and hopefully will be afloat again, albeit with some ingenuity,brute force and funds.
“We don’t have a problem, it’s just an unresolved situation we haven’t thrown enough time and money at yet!”. 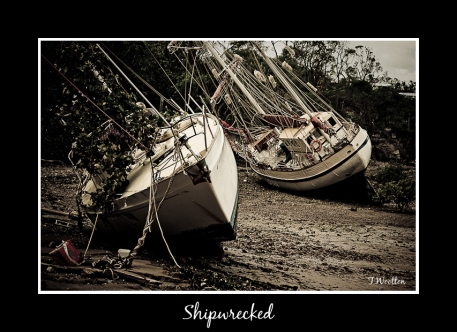 The biggest cost will be the loss of earnings for the various commercial vessls that have found themselves in this predicament.