Goodbye to a Friend

Last night I received the sad news that an old friend had passed away. I have previously posted about the Ellis Brothers here. Alec Ellis passed away earlier this year and Mort suddenly died a couple of days ago at the ripe old age of 98!

Like their brother Ossie, they were still active at the time of their passing so thankfully they all died ‘with their boots on’, Mort had been down to the nearest town, Sheffield, to get some groceries earlier in the week and looked fine according to a friend.

Thankfully, I had called in to see him back in August when I was last in Tasmania and  he was still in fine form, living simply in his shack at Cradle Mountain, expounding passionately on the evils of man’s greed and it’s effect on the natural world, still tinkering with his perpetual motion machine.

Axeman, trapper, cheesemaker, fisherman, miner, sawmiller, ferry-captain, these were just some of the occupations that Mort found himself in during a knock-about life  that had it’s fair share of hard times. Tough men during tough times, but for all that, Mort,Alec & Ossie were incredibly generous, with a twinkle in their eye and a humour that was uniquely Tasmanian. 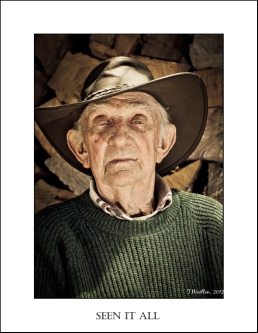 When I last saw him, Mort was a little bemused to find himself on the cover of a book, “Through Their Eyes- Glimpses of a Changing Australia” by Lucy Taylor, Published by Brigalow Press in which the author had travelled Australia recording the stories of people such as Mort. Well worth reading to hear the perspective of a generation that has seen more change than any other!

This time I didn’t make any photographs of Mort, in the past he has been very patient & generous with me and I was able to capture some nice shots of him and I have some great memories of a good friend to me & my late father.

Although he was not particularly sentimental and he always maintained that there was no ‘afterlife’ as many people would like to believe, I hope that if there is, he catches up with my father and his two brothers over a cold Boag’s or two and have some of those spirited debates that they were all so fond of having!

This entry was posted on December 8, 2014 by islandimages. It was filed under Images, Tasmania and was tagged with Cradle Mt, Ellis, Mort Ellis.